On March 21st, 2006, University of California Riverside Chancellor France A. Córdova presented a Champion of Science Award to Rep. Ken Calvert (R-CA) on behalf of The Science Coalition, which was co-founded by the University of California. Calvert is Chairman of the Space and Aeronautics Subcommittee for the House Committee on Science.

“Ken Calvert works tirelessly to improve public education, the environment and the advancement of NASA – all issues particularly near and dear to my heart,” said Chancellor Cordova, who worked for NASA as a chief scientist.The Congressman was honored for his ardent support for science, which includes his establishment of the Science and Technology Education Partnership. This partnership is inspiring students to pursue careers in science, math, engineering and technology.

Rep. Ken Calvert, R-Corona, accepts an award at the Mission Inn Tuesday recognizing his service to science, and to the University of California. At the right are UC Riverside Chancellor France A. Córdova, Eric Juline, a UC Regent and Vice President of the Alumni Associations of UC, and UC President Robert Dynes. 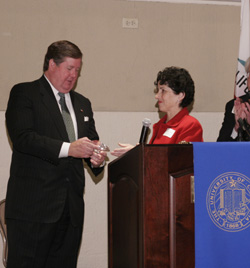